Thermocouples, the most widespread and inexpensive temperature sensors, are used in technical, experimental, or even household instruments for its compact size, response rate, and performance efficiency. It is an integral part of power production industries, pharmaceuticals, bioTech instruments, or your in-home water heater or gas furnace, and you would obviously want to get the best out of the device.

Are you in a hassle thinking about if the thermocouple of the water heater, toaster, or boiler is working accurately or not? Well, be it for industrial or household purposes, for ensuring flawless operation, you should have precise knowledge about its working process and characteristics.

To help you get in-depth knowledge about this temperature sensing equipment and make sure it is working in its best condition, I am summarising here the essentials you have to know about thermocouples.

A thermocouple sensor is simply an electric instrument that comprises two distinct electric conductors and senses temperature, producing temperature variant voltage through thermoelectric effect. The electric junction the two conductors form acts as the measurement terminal, and the generated electromotive force (emf) works as the interpretation of the measured temperature.

As I already mentioned, thermocouples come in various uses. Let’s get insight into the many applications and benefits the thermocouple sensor offers.

Uses of a Thermocouple

Some of the surpassing benefits that come with this temperature sensor:

Type K thermocouple is well-known over other types because:

A thermocouple thermometer is an industrial grade and precise temperature measuring instrument that features built-in thermocouples or utilises external ones for inputs.

How Does Thermocouples Work?

Let’s get an overview of how this economical yet efficient temperature sensor works.

A thermocouple works depending on the Seebeck effect, a thermoelectric effect established by the renowned German scientist Johann Seebeck in 1821.

The Seebeck effect denotes the phenomenon of producing an electromotive force between two conductors when there occurs a temperature variance between the two joints they form. The Seebeck voltage is usually measured in mV per Kelvin.

How Does a Thermocouple Measure Temperature?

The working process of the thermocouple is as follows:

Signs of a Bad Thermocouple

Be it a water heater, gas wall heater, or a gas furnace, thermocouples are an integral part of any industrial or household devices. But sometimes, it can get damaged and cannot perform efficiently.

You can know whether your temperature sensor is malfunctioning if:

Thermocouples are essential to ensure your appliance is working following the parameters you have set. Hence, buying from the most reliable source is crucial. Process Parameters provide quality thermocouples, offering you a variety of choices according to your requirement, backed by skilled and efficient technical support.

In a thermocouple circuit, two conductors get combined to form the measuring junction. The other ends are not connected, form the reference terminal, and get linked to the system through its Copper traces.

A voltmeter is used to measure the emf induced at the reference junction related to the temperature difference between these two points.

The temperature conversion chart for the widely-used Type-K thermocouple is:

The IEC colour codes applicable only within the Europe and UK from the process parameters: 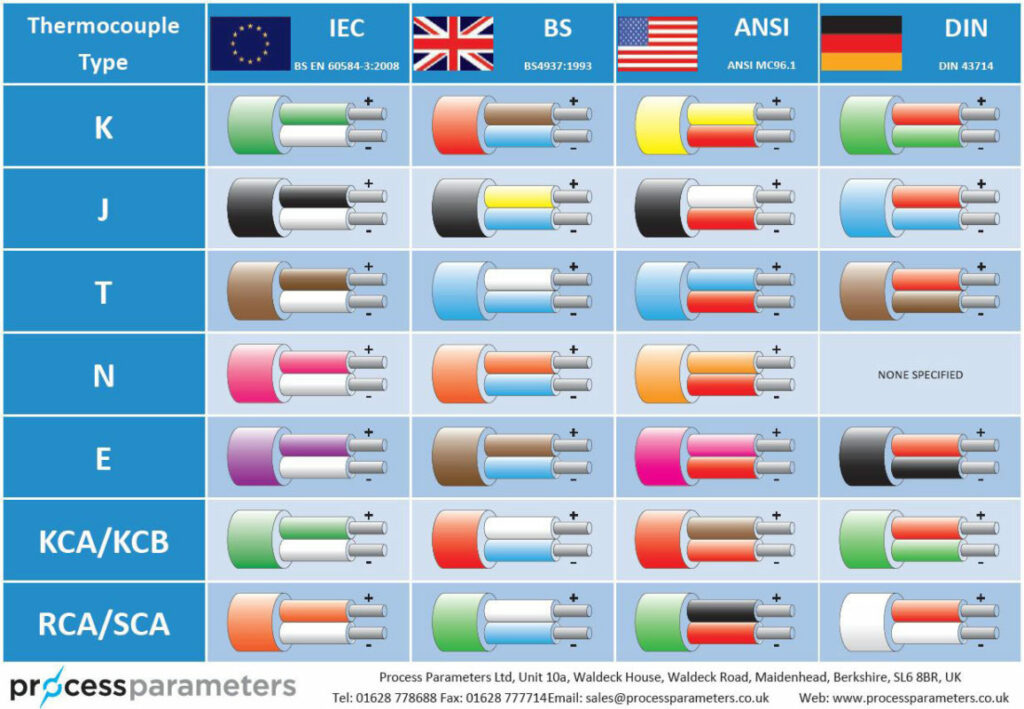 The simple circuit configuration of thermocouple has made it encompass almost all sectors of industries and scientific applications. It is rugged, accurate, and ensures reliability in operations if purchased from a dependable source and operated with precision.

The above information I have gathered would be a milestone in the process of gaining knowledge about this effective electrical instrument.